The people of China have long held the understanding that the crossbow was invented in Ancient China. And in all likelihood, they’re probably correct. That’s not to say that other cultures may not have also independently developed their own crossbow technology. However, the Chinese can document the use of crossbows into antiquity.

In his book, “Chinese Archery” (1) author Stephen Selby recounts the following legend from the Han Dynasty, regarding the advent of the crossbow:

The King asked, “What makes the composition of a crossbow so effective?”

Yin answered, “The firing mechanism casing is like the walls of a city: it protects all the ‘ministers’. The trigger-lever is the overlord: all commands originate from it. The release (nut) is the enforcer: it controls the officers and men. The latch (seer) is like a lieutenant: it holds the inner formations in check. The firing mechanism assembly is like the cavalry commander: it commands an advance or a halt. The axle-bolts are passive servants: they comply with whatever is ordered. The stock is like a roadway: it provides a path for whatever is sent. The prod is like the general: it is responsible for the most onerous duties. The string is like the commander: it drives the warriors. The quarrel is like the flying knight: at the command and guidance of the master. ( . . . ) for whatever the crossbow is aimed at, dies without fail. That is the method as I learned it.”

In ancient times, mastering the art of the bow and arrow required a major educational exercise and few achieved the highest pinnacles of proficiency. The advent of the crossbow changed that. It wasn’t simply a matter of the crossbow being a superior mechanism, but from it’s earliest inception it was seen to allow a relatively unfit and untrained recruit to pull a heavy bow using two hands with the bow braced with their feet. More soldiers could take advantage of the increased range and power without needing a large investment in training and strength building. (1)

Many cast bronze trigger mechanisms have survived the ages. To hear it told, a farmer can’t plow his field in China without turning up a trigger. The mechanisms were so effective that they were used over the course of 1500 years until crossbows were replaced by the first gunpowder weapons. The trigger mechanism in this presentation is a reproduction by a modern artist who based his castings on an actual ancient artifact. I’ve entered a crossbow trigger in previous contests and the documentation for that entry is attached as Appendix 1.

But this entry is about the Stock (or Tiller, depending on the term you prefer). What did those look like and how did they work? Well, there’s certainly no shortage of historical artwork depicting crossbows. But artists aren’t archers or engineers and such artwork can only give a limited perspective. Fortunately, there’s this: 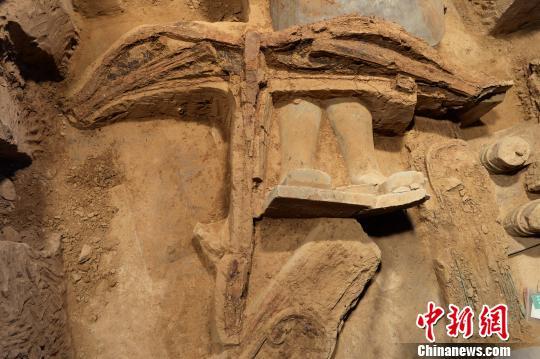 Reported by news site China.org to be the most complete crossbow found to date at the site of the Terracotta Army. Researchers believe the string is made of animal tendon rather than fabric, which would have degraded and disappeared long ago. Many of the weapons that were buried with the terracotta army were just like this one: fully functioning and military grade weapons at the time.

Author Stephen Selby (1) at one time had a crossbow in his collection faithfully reproduced from historical artifacts in his collection. Sadly, it was considered a deadly weapon by Chinese authorities and confiscated. However, I’ve been in contact with him and I’m using data from his crossbow in order to make mine. 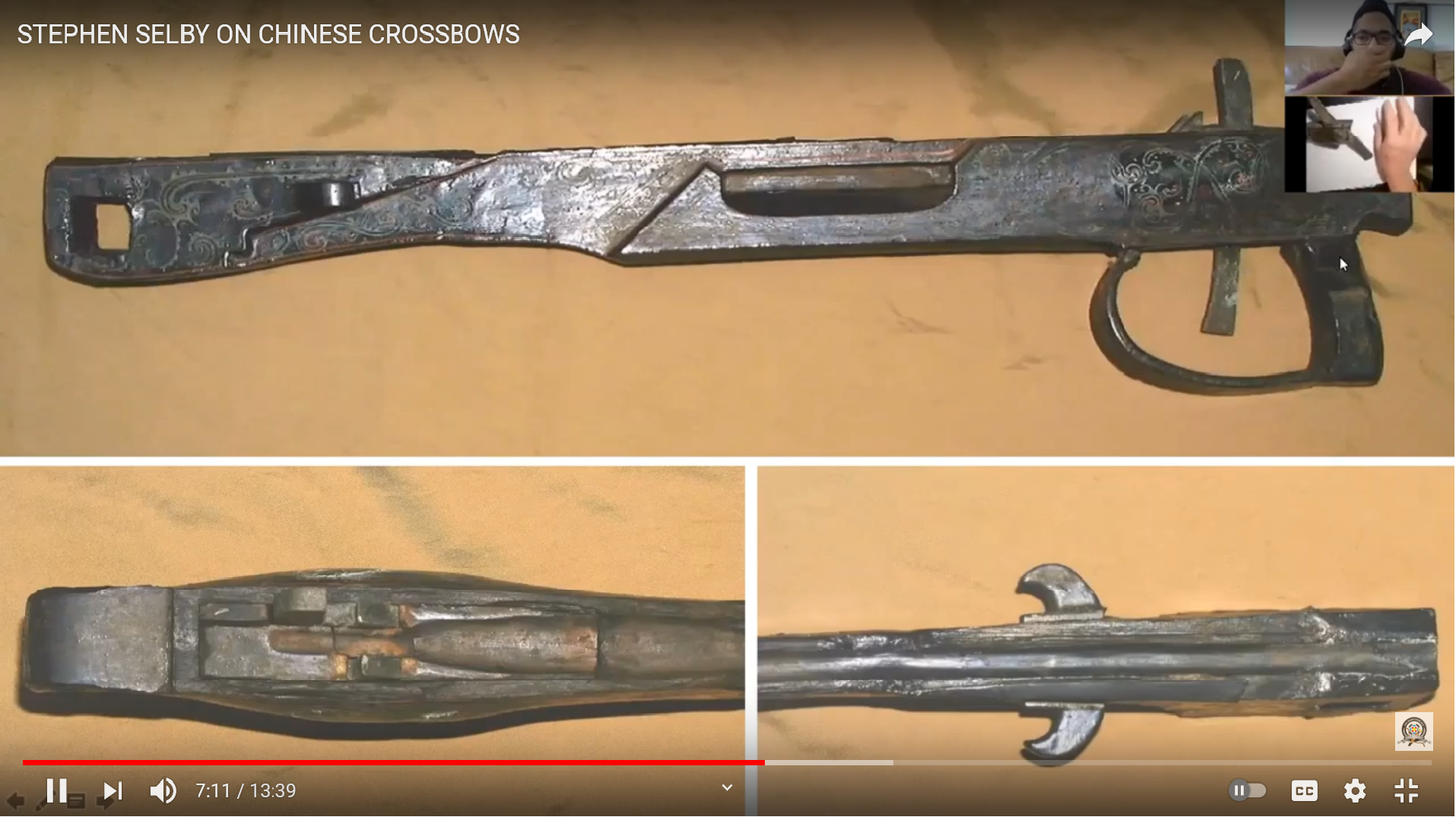 Figure 2. An original Han Dynasty Crossbow stock, from the collection of Stephen Selby 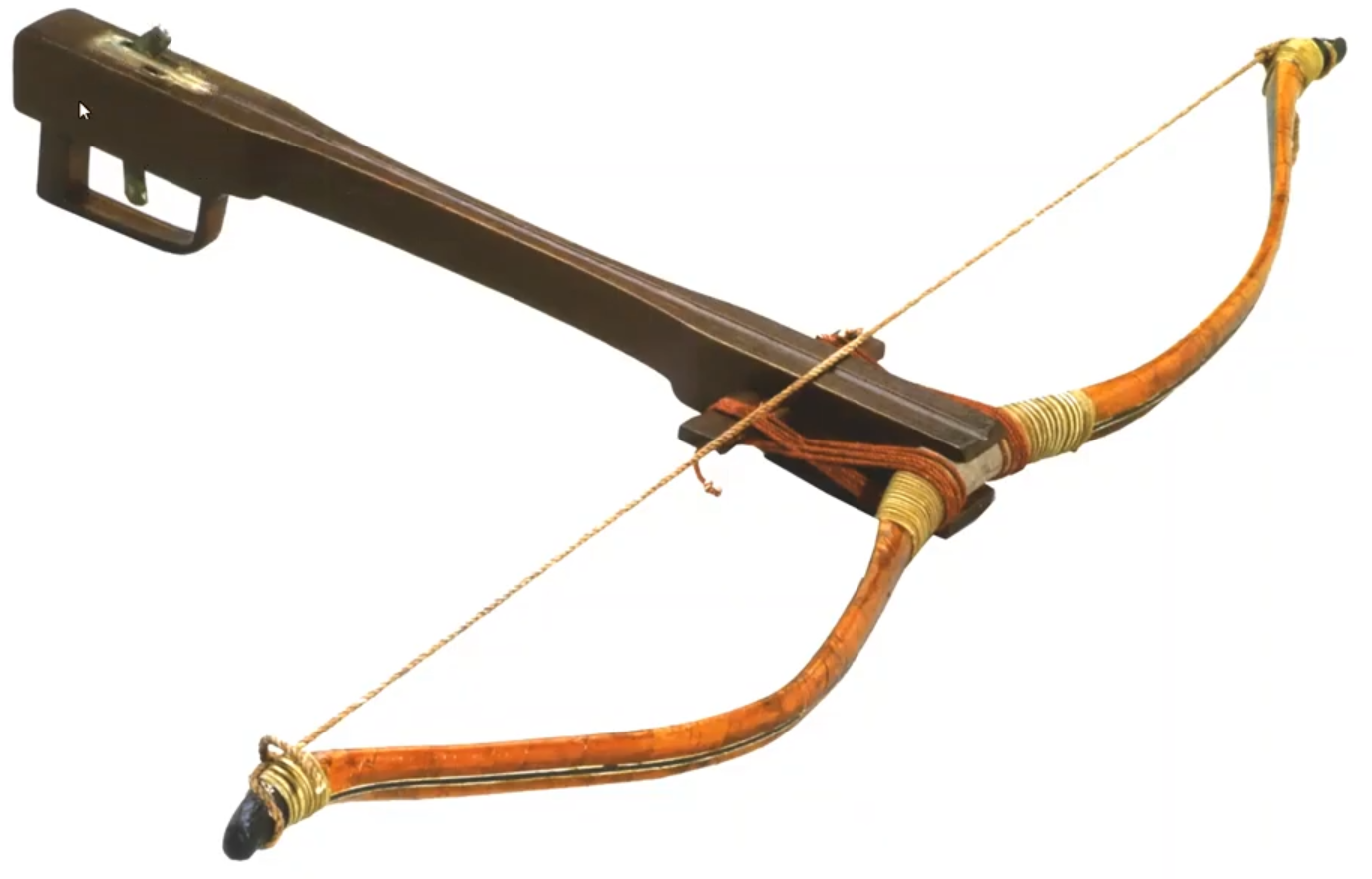 The well preserved original (fig. 2) from Mr. Selby’s collection was found as part of a tomb burial. Mr. Selby states that this crossbow was likely manufactured for the specific purpose of tomb burial, based on the elaborate construction and decoration. Such a crossbow was not likely ever issued to the army. His reproduction crossbow (fig. 3) is more typical of the utilitarian construction of a munitions grade weapon. It is a crossbow such as this that I am trying to recreate. The historical crossbow from the Xian excavation (fig. 1) confirms this design is true to history.

What it is: The item presented today is best considered a learning experiment. This is the first phase of an overall project. I’m using this project to help clarify and perfect the next project. I’m working out the details of construction and dimensions for what is to follow. This project is made from “expendable” materials. It also has made use of modern powered methods of woodworking, although the much of the finish work is done with hand tools.

What it is NOT: This project is not a study of ancient Chinese woodworking methods. Some of that will be explored in the next phase, but I’m not going to be starting from a log on any of this. That simply is not the scope of this project.

While presentation of this project includes a cast bronze trigger and a bow to make it a complete crossbow, neither of these parts are substantially my own work. Please consider only the tiller in your evaluations.

What: A prototype reproduction of a tiller, suitable for use in a Han Dynasty crossbow.

When: The Han Dynasty was from 206 BCE to 220 CE (with a brief time of rebellion from 9 to 23 CE). This style of crossbow would have been from somewhat later in this time period.

Where: The Han Dynasty comprised all of what is now modern China. It was the second fully Imperial Dynasty to unite all of China, after the short lived Qin.

How: Modern power tools were used on this phase of this project. Primarily, that is because this is very much a prototype, an attempt to figure out dimensions and the like. But also, this project was started very late in order to be considered for the Dragon’s Laire Arts and Sciences competition. I simply didn’t have time to remove so much material using hand tools. This part of the project is finished. I’ve learned everything I need to do the next one. Better materials and more use of hand tools will be part of that phase. I probably won’t even try to fire this one. I don’t have any suitable projectiles for it yet.

As to the building process, I don’t see the point in going into great details on that. I did just what you might expect in order to make this. And the process isn’t particularly interesting. Table saw, drill press, etc. etc. yawn.

Mistakes: Remember I said I was in a hurry? Yeah. Mistakes were made due to that. And being tired and depressed for the last year hasn’t helped either. This phase of the project really feels like I forced it. But I DID learn what I need to know. And that’s what prototyping is for.

So here it is. My project does everything I need it to do at this stage. The trigger assembly fits in well, as does the bow. I can tie the bow in securely. I can draw the bow back to the trigger. The trigger engages the string and holds it securely. I plan to shoot a video of the assembly of the various pieces into a functional crossbow. It will be part of my official presentation. 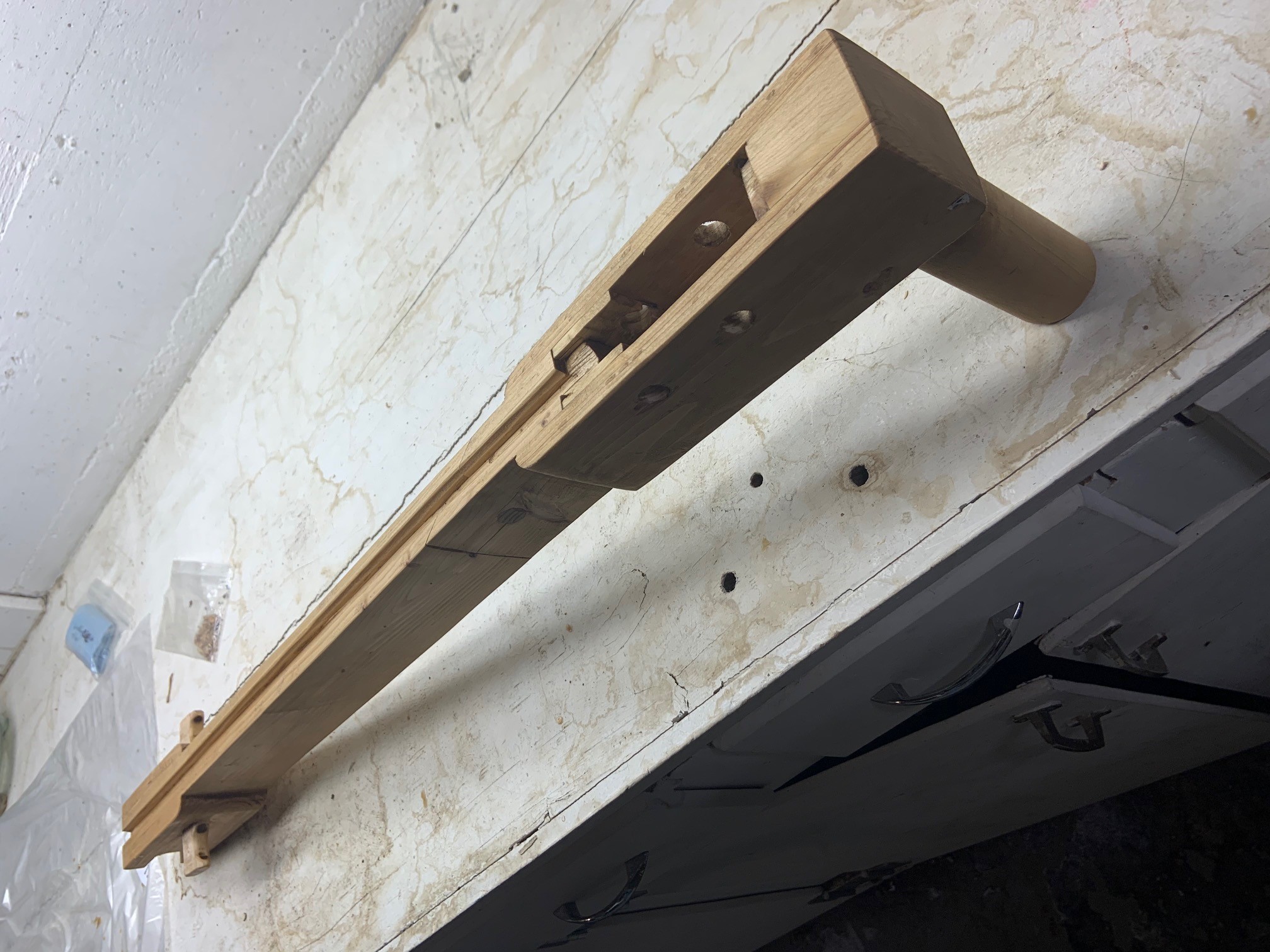 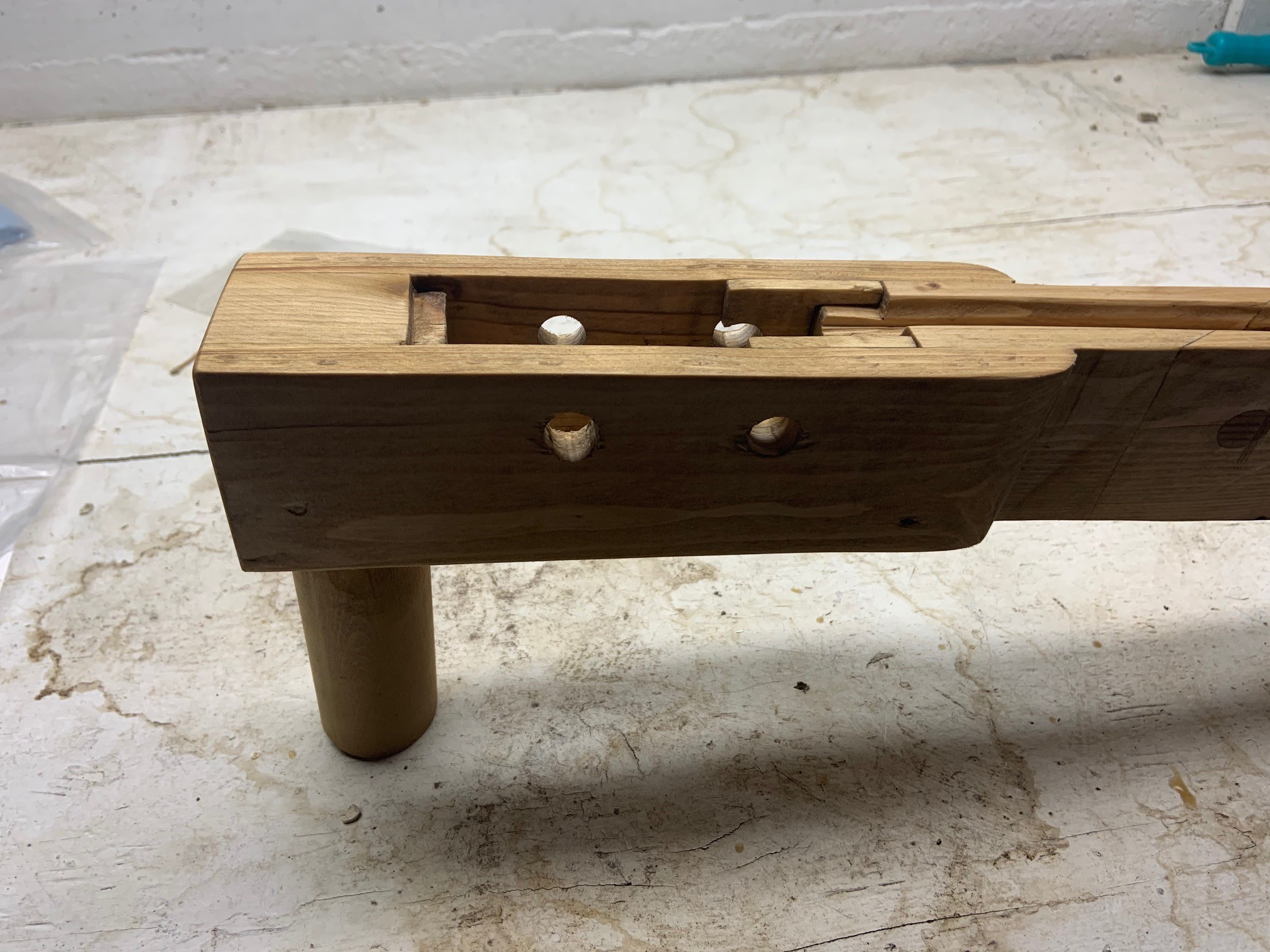 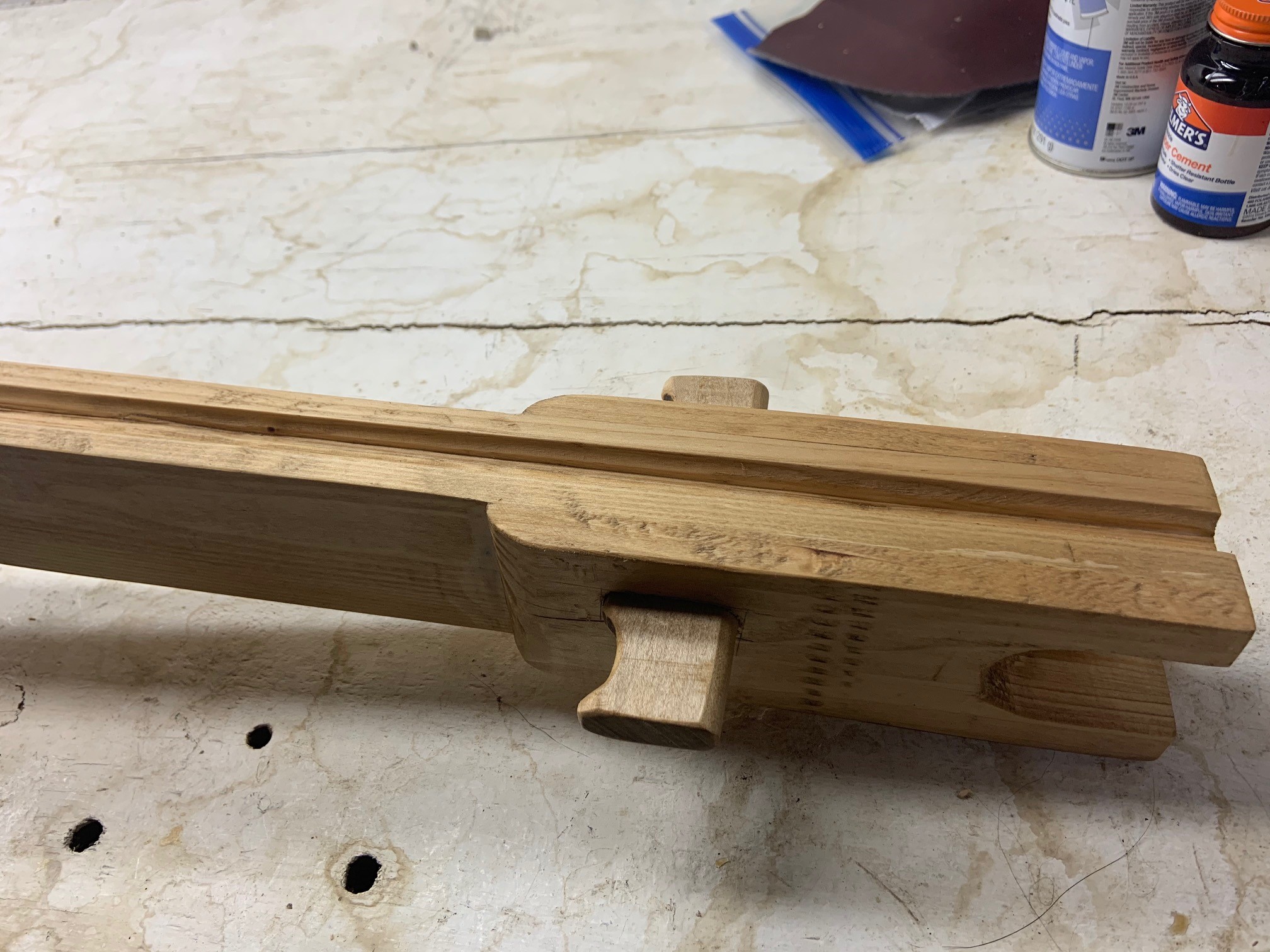 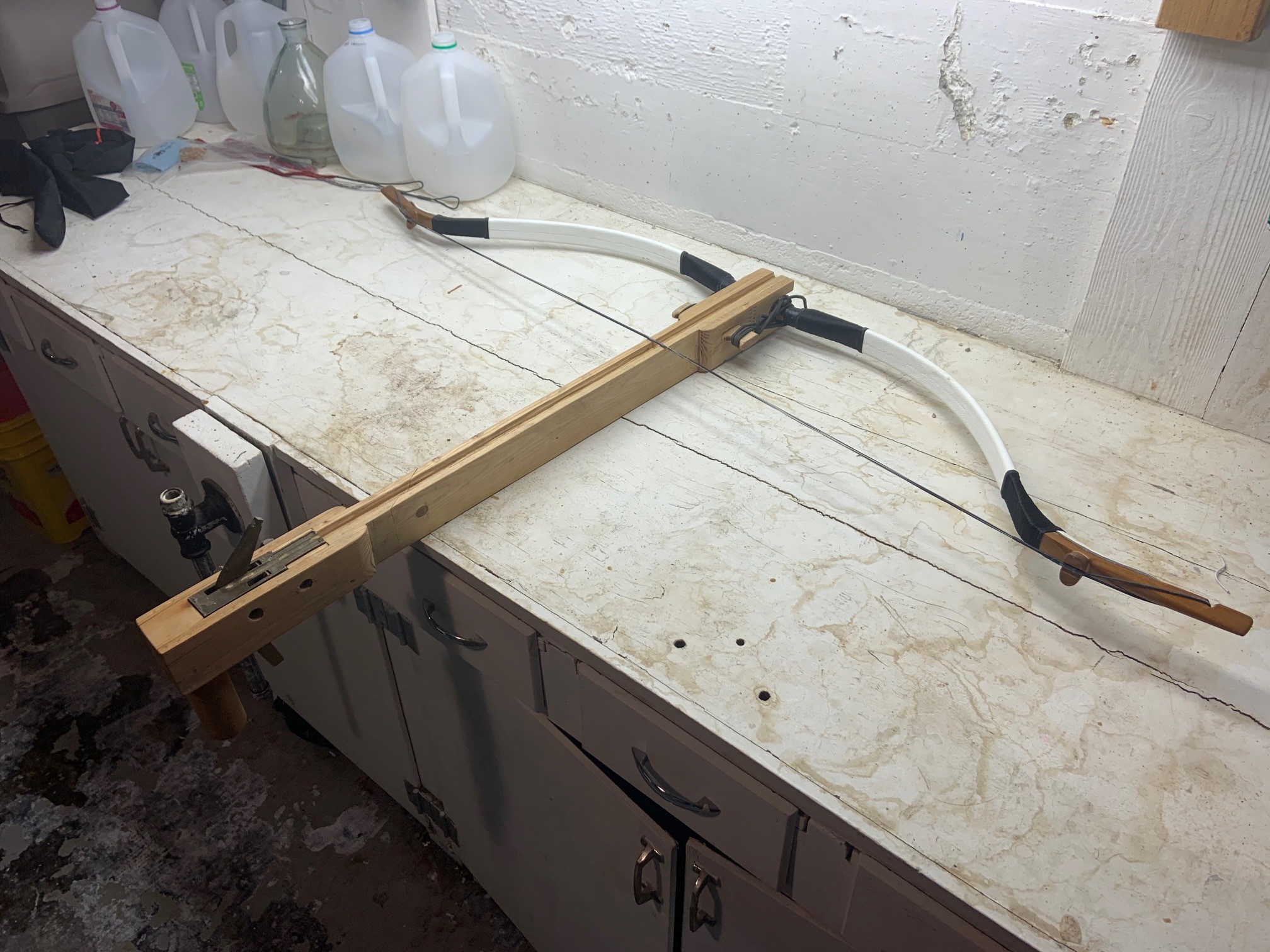 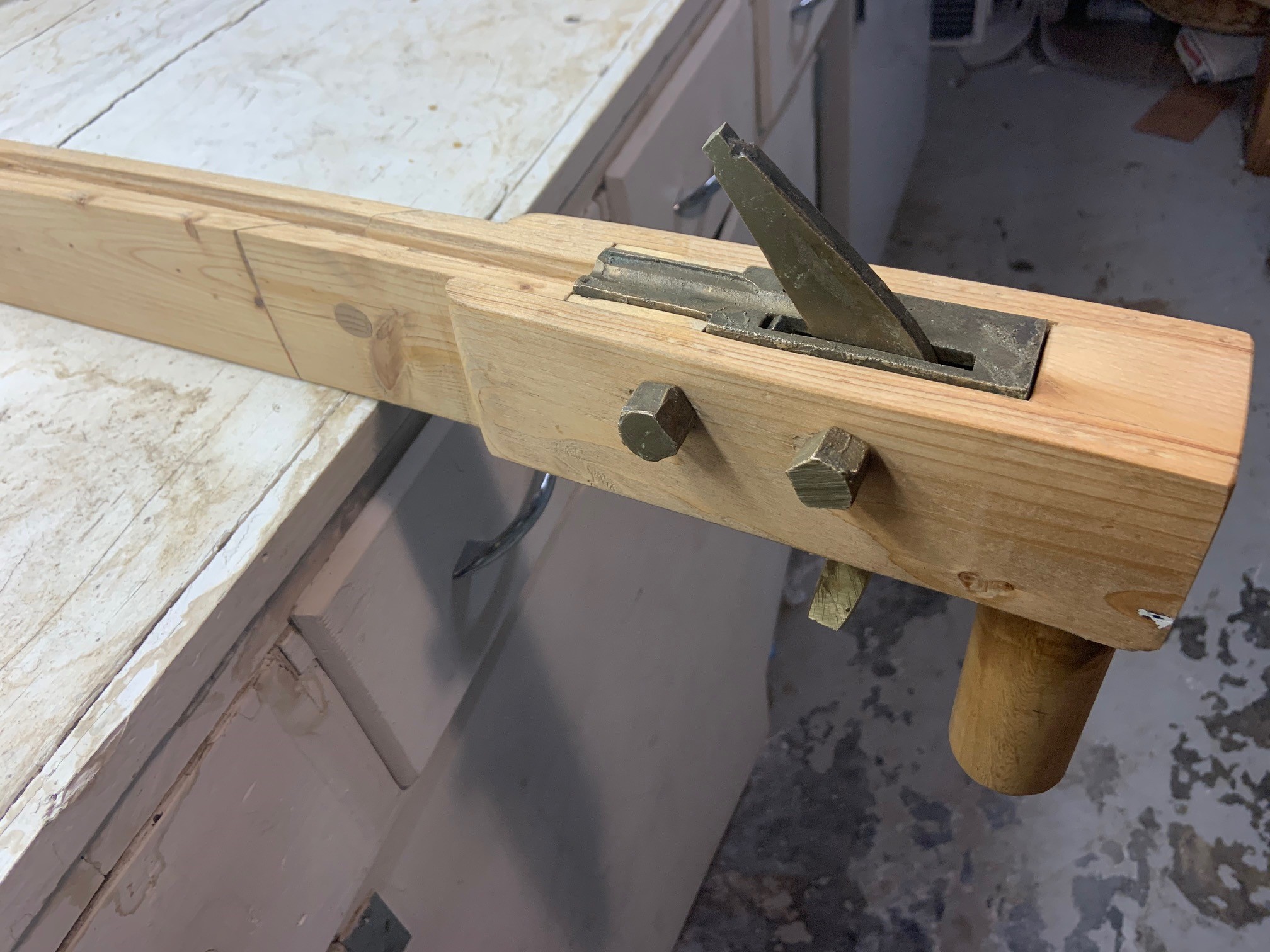 I decided there’s really no valid reason beyond my nervousness not to try and fire it. Here’s a video. https://www.youtube.com/watch?v=Z3nXdkiYlbI